The Carvings of Wan Ko Yee (H.H. Dorje Chang Buddha III), A Master of Art Were Exhibited, Providing People The Opportunity to Appreciate the Highest Form of Art

A Master of Art Were Exhibited, Providing People The Opportunity to Appreciate the Highest Form of Art 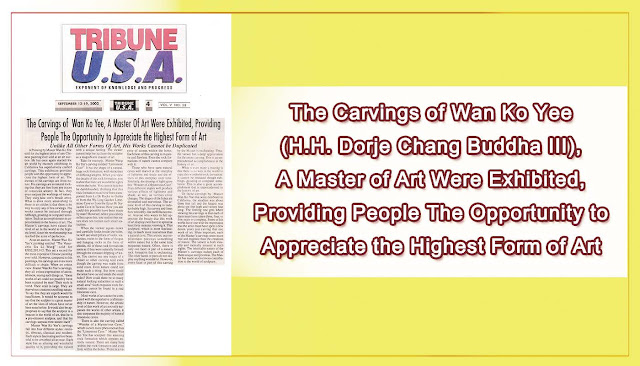 On April 3, 2008, a solemn and dignified first-publishing ceremony of a fact-recording book entitled H.H. Dorje Chang Buddha III, which published jointly by the World Buddhism Publishing LLC and the World Dharma Voice, Inc., was held at the Library of the Congress of the United States. The book was also formally accepted into the collection of the Library of the Congress of the United States. Only since that time, did people in the world know that Master Wan Ko Yee, who had been broadly respected by the great masses and who had also been known as Great Dharma King Yangwo Yeshe Norbu, had been recognized by the world’s leaders, regent dharma kings, and great rinpoches of Buddhism through official documents as the third incarnation of Dorje Chang Buddha, who is the primordial Sambhogakaya Buddha of the universe. The Buddha’s name is H.H. Dorje Chang Buddha III. Since then, people began to address His Holiness the Buddha by “Namo[1] Dorje Chang Buddha III.” This is similar to the situation that Sakyamuni Buddha’s name was Prince Siddhartha Gotama before attaining Buddhahood. However, after Sakyamuni Buddha had attained Buddhahood, His title changed to “Namo Sakyamuni Buddha.” That is why we now address His Holiness the Buddha as “H.H. Dorje Chang Buddha III.” 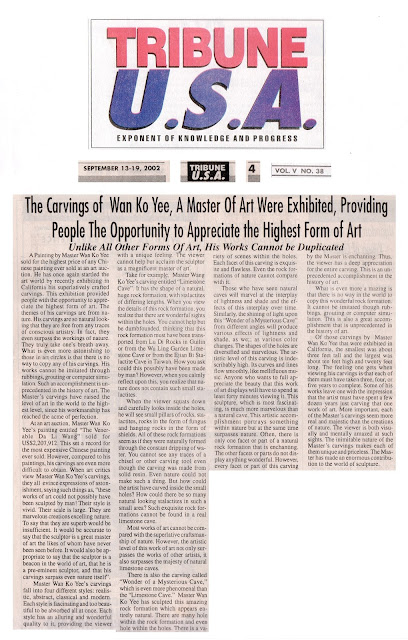 The Carvings of Wan Ko Yee (H.H. Dorje Chang Buddha III, A Master of Art Were Exhibited, Providing People The Opportunity to Appreciate the Highest Form of Art

Unlike All Other Forms Of Art, His Works Cannot be Duplicated

A Painting by Master Wan Ko Yee (H.H. Dorje Chang Buddha III) sold for the highest price of any Chinese painting ever sold at an art auction. He has once again started the art world by recently exhibiting in California his superlatively crafted carvings. This exhibition provided people with the opportunity to appreciate the highest form of art. The themes of his carvings are from nature. His carvings are so natural looking that they are free from any traces of conscious artistry. In fact, they even surpass the workings of nature. They truly take one’s breath away. What is even more astonishing to those in art circles is that there is no way to copy any of his carvings. His works cannot be imitated through rubbings, grouting or computer simulation. Such an accomplishment is unprecedented in the history of art. The Master’s carvings have raised the level of art in the world to the highest level, since his workmanship has reached the acme of perfection.

Master Wan Ko Yee’s carvings fall into four different styles: realistic, abstract, classical and modern. Each style is fascinating and too beautiful to be absorbed all at once. Each style has an alluring and wonderful quality to it, providing the viewer with a unique feeling. The viewer cannot help but acclaim the sculptor as a magnificent master of art.

Take for example, Master Wan Ko Yee’s carving entitled “Limestone Cave”. It has the shape of a natural huge rock formation, with stalactites of differing lengths. When you view the details of this rock formation, you realize that there are wonderful sights within the holes. You cannot help but be dumbfounded, thinking that this rock formation must have been transported from Lu di Rocks in Guilin or from the Wu Ling Garden Limestone Cave or from the Ejian Bi Stalactite Cave in Taiwan. How you ask could this possibly have been made by man? However, when you calmly reflect upon this, you realize that nature does not contain such small stalactites.

When the viewer squats down and carefully looks inside the holes, he will see small pillars of rocks, stalactites, rocks in the form of fungus and hanging rocks in the form of shield. All of these rock formations seem as if they were naturally formed through the constant dripping of water. You cannot see any traces of a chisel or other carving tool even though the carving was made from solid resin. Even nature could not make such a thing. But how could the artist have carved inside the small holes? How could there be so many natural looking stalactites in such a small area? Such exquisite rock formations cannot be found in a real limestone care.

Most works of art cannot be compared with the superlative craftsmanship of nature. However, the artistic level of this work of art not only surpasses the works of other artists, it also surpasses the majesty of natural limestone caves.

Those who have seen natural carves will marvel at the interplay of lightness and shade and the effects of this interplay over time. Similarly, the shining of light upon this “Wonder of a Mysterious Cave” from different angles will produce various effects of lightness and shade, as well as various color changes. The shapes of the holes are diversified and marvelous. The artistic level of this carving is indescribably high. Its curves and lines flow smoothly, like mellifluous music. Anyone who wants to full appreciate the beauty that this work of art displays will have to spend at least forty minutes viewing it. This sculpture, which is most fascinating, is much more marvelous than a natural cave. This artistic accomplishment portrays something within nature but at the same time surpasses nature. Often, there is only one facet or part of a natural rock formation that is enchanting. The other facets or parts do not display anything wonderful. However, every facet or part of this carving by the Master is enchanting. Thus, the viewer has a deep appreciation for the entire carving. This is an unprecedented accomplishment in the history of art.

What is even more amazing is that there is no way in the world to copy this wonderful rock formation. It cannot be imitated though rubbings, grouting or computer simulation. This is also a great accomplishment that is unprecedented in the history of art.


Of those carvings by Master Wan Ko Yee (H.H. Dorje Chang Buddha III) that were exhibited in California, the smallest was about three feet tall and the largest was about ten feet high and twenty feet long. The feeling one gets when viewing his carvings is that each of them must have taken three, four, or five years to complete. Some of his works leave one with the impression that the artist must have spent a few dozen years just carving that one work of art. More important, each of the Master’s carvings seem more real and majestic than the creations of nature. The viewer is both visually and mentally amazed at such sights. The inimitable nature of the Master’s carvings makes each of them unique and priceless. The Master has made an enormous contribution to the world of sculpture.

The Carvings of Wan Ko Yee (H.H. Dorje Chang Buddha III), A Master of Art Were Exhibited, Providing People The Opportunity to Appreciate the Highest Form of Art

Homage to H.H. Dorje Chang Buddha III-- Praying for “Her” 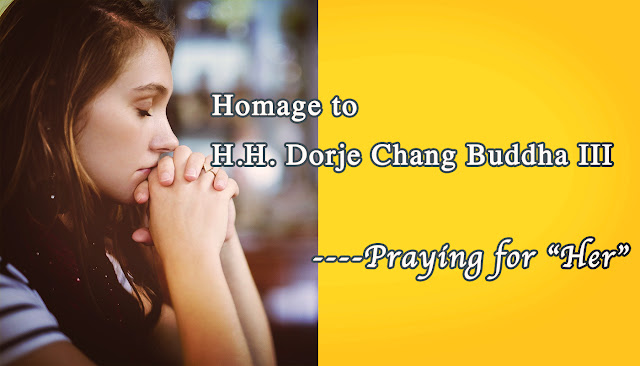