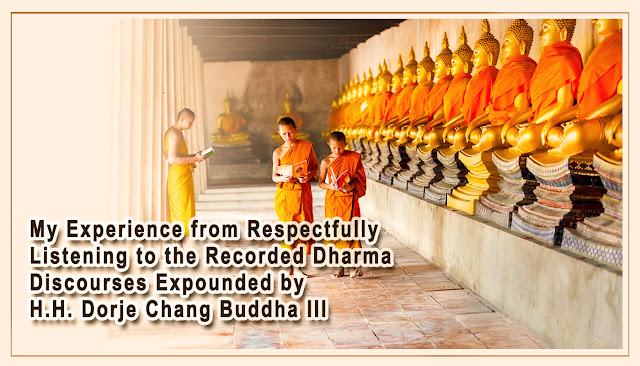 I feel very fortunate and lucky that I can have the opportunity to listen respectfully to the recorded dharma discourses expounded by H.H. Dorje Chang Buddha III.

The recorded dharma discourses expounded by H.H. Dorje Chang Buddha III that I listened to include What is Cultivation?, Impermanence, and others. Every time after respectfully listening to a recorded dharma discourse, I felt like being a fully charged computer. The dharma discourse alerted me to wake up from complex and chaotic worldly matters, reminding me that I must cultivate to become liberated from samsara and benefit others using the benefits I received.

In particular, the dharma discourse expounded by H.H. Dorje Chang Buddha III entitled A Deviated Mind Attached to Phenomena is Mara; Differentiation under Any Circumstances Diverges from the State of Meditation benefited me especially very much. After respectfully listening to this dharma discourse, I began to learn how to put down attachment to self and how to prevent myself from being pulled by external states. However, in this process of learning, I am still often attached to various matters due to my habitual nature of an ordinary being. Only until after the incident, was I able to introspect to realize that I should hold up the correct thought, cultivate myself well, and put down attachment to self. Then I again began to make the effort to act according to the teaching.

I have been back and forth in this process. I make mistakes often, but I also repeatedly remind myself after the incident.

Under a karmic condition, misunderstanding was produced between me and several friends of mine due to our different opinions in the process of working together. One of them attacked and criticized me in many ways. Had the situation occurred before I started to learn Buddhism and cultivate myself, I would have rebutted and scolded loudly in return long ago. Then the result would definitely be like a struggle of life and death. However, I was very calm at that time. I knew that if I was attached to it, afflictions would arise in me. I thought, “I should put it down. There is no need to explain. After a while, this misunderstanding will be untied and solved.” In the end, the misunderstanding did become resolved due to the rising of another karmic condition. As an after-thought, I feel this really is a beneficial effect from listening to the dharma, so that I was able to hold up my correct thinking in this unfavorable situation and continue to learn and act according to the teaching!

Therefore, I am very grateful to the opportunity of encountering the true dharma of the Tathagata from H.H. Dorje Chang Buddha III!

I am grateful to all Buddhas and Bodhisattvas in the ten directions!

While Learning from the Buddha I Found My Life Companion (Learning the Buddha Dharma of H.H. Dorje Chang Buddha III) 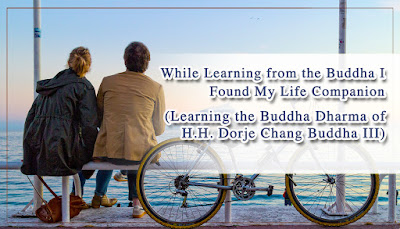